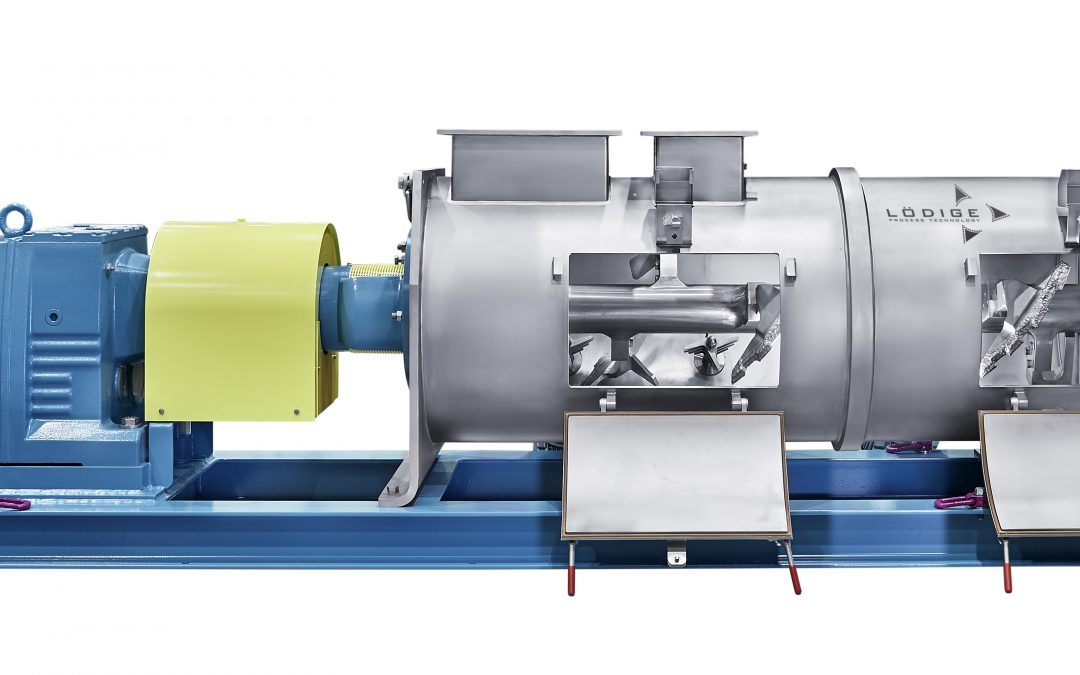 Short retention times, constant reproducibility, the highest degree of homogeneity of the final product and versatile application. These are the features that distinguish the continuous Ploughshare® mixer KM developed by Lödige Process Technology. It is thus the right type of mixer for a multitude of applications. The low-maintenance KM is suitable for processing powdery, fibrous or granular solids, as well as liquids and pastes. Granulation processes can also be carried out with the continuous mixer with a minimum dwell-time.

The continuous mixer is based on mechanically generated turbulent fluidized bed process, patented by Lödige. During this process, the Ploughshare® shovels rotate close to the wall in a horizontal, cylindrical drum. Their peripheral speed and geometric shape is rated such that they take the mixing components off the drum wall and toss them into the free mixing compartment from the product bed. Due to the continuous mixing of the entire product, intensive blending is thus achieved even at extensive material throughputs. Transport of the product is ensured by the special shape and arrangement of the mixing elements. In this manner, excellent homogeneity and consistent reproducibility of the final product are achieved during short mixing or retention times of only 25 to 60 seconds.
In addition to its exceptional efficiency, part of the sophisticated mixer concept is the universal applicability of the machine. Beyond the processing of dry, powdery, granular or fibrous solids, it can be equipped for numerous other mixing tasks. Liquids can be added to moisten the product components, and pastes and liquids can also be processed. In addition, the installation of choppers in the mixing drum permits agglomerates to be opened up and targeted granulation during the mixing process. Further equipment options are a heated or cooled drum, head pieces and a shaft, as well as an axially split mixing drum for short maintenance intervals that permits the removal of the complete mixing mechanism in the shortest time possible. During times of particular demand, highly wear-resistant surfaces, high-strength structural steels, stainless steels and special materials even further increase the high availability of the continuous Ploughshare® mixer. The wide range of different sizes also makes for high versatility of the mixer.

The smallest model with a drum capacity of 5 litres has a throughput capacity of 0.25 m3/h, depending on retention time and filling level. The largest machine built by Lödige to date was also a Ploughshare® Type KM mixer. The continuous intensive mixer with a drum capacity of 57,000 litres has been in operation at an Indian steelworks since 2015. Here it mixes and granulates the sintering material needed in the blast furnace for pig-iron production, and can handle more than 1,350 tonnes of raw sintering mixture per hour.