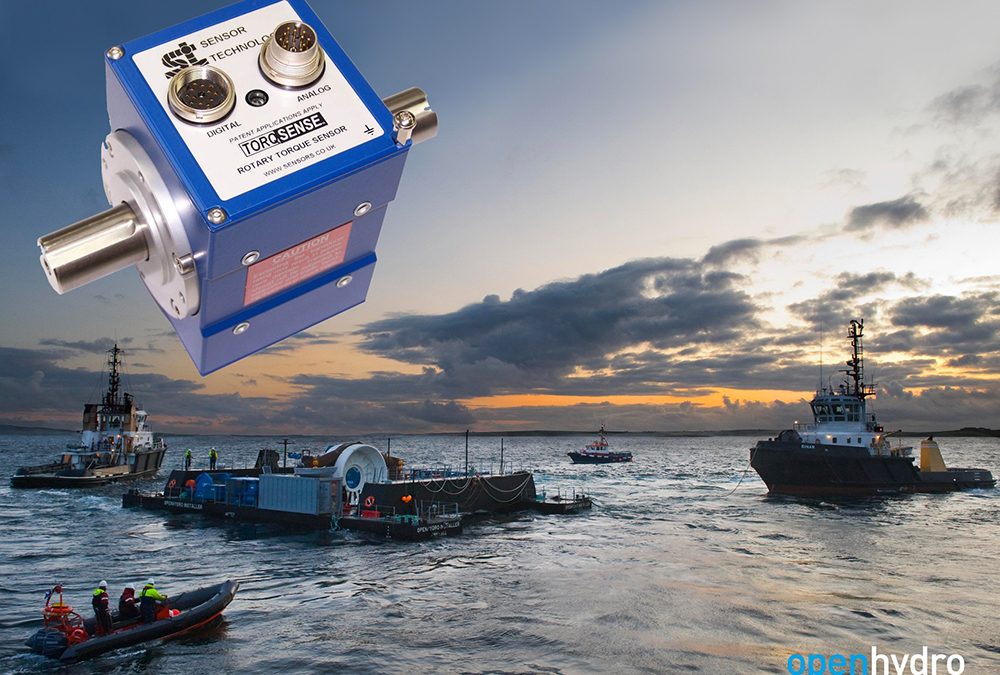 Non contact torque sensors from Sensor Technology are playing a key role in the development of commercial-scale in-stream tidal turbines produced by Irish company, OpenHydro. The company is using these novel sensors, which are based on surface acoustic wave (SAW) technology, to accurately measure rotational speed and frictional forces in a simulator for the turbine bearings, thereby allowing it to optimise the performance and reliability of its innovative products.

OpenHydro is a technology company that designs and manufactures marine turbines to generate renewable energy from tidal streams. The company’s vision is to deploy farms of tidal turbines under the world’s oceans, where they will dependably generate electricity with no cost to the environment. This method of producing electricity has many benefits.

Because the turbines are submerged, they are invisible and they produce no noise. And because they are submerged at a considerable depth, they present no hazard to shipping. An advantage that is possibly the most important, however, is that the tides are completely predictable, which means that the energy output of the turbines is equally predictable. There are no large seasonal variations and no dependence on the vagaries of the weather, as there are with many other renewable energy sources.

Reliably and efficiently harvesting energy from the tides, however, requires the use of novel technology and, in the case of OpenHydro, this takes the form of open-centre turbines that can be deployed directly on the seabed. Clearly, installation in such an inaccessible location makes reliability a prime consideration in the design and construction of the turbines. For this reason, OpenHydro carefully and comprehensively evaluates the performance of all of the components used in its turbines.

For the bearings, this evaluation involves the use of a simulator that allows the company’s engineers to determine how frictional forces in the bearings vary with different loads and rotational speeds. Central to the operation of this simulator is the measurement of torque in a shaft from the motor that drives the bearing under test. With conventional sensors, it is hard to carry out this type of torque measurement accurately and reliably, but OpenHydro found that Sensor Technology’s TorqSense RWT420 series sensor provided an ideal solution.

Like all TorqSense sensors, the RWT420 units depend for their operation on surface acoustic wave (SAW) transducers. These transducers comprise two thin metal electrodes, in the form of interlocking “fingers”, on a piezoelectric substrate such as quartz.

When an RF signal of the correct frequency is applied to the transducer, surface acoustic waves are set up, and the transducer behaves as a resonant circuit. If the substrate is deformed, however, the resonant frequency changes. When the transducer is attached to a drive shaft, the deformation of the substrate and hence the change in resonant frequency will be related to the torque applied to the shaft. In other words, the transducer operates as a frequency-dependent strain gauge. Since the transducers operate at radio frequencies, it is easy to couple signals to them wirelessly. Hence TorqSense sensors can be used on rotating shafts, and can provide data continuously without the need for the inherently unreliable and inconvenient brushes and slip rings often found in traditional torque measurement systems.

“We chose the RWT420 because of its convenient wireless operation, and because it was easy for us to fix in line with an existing shaft in our experimental set up,” said Kevin Harnett, Mechanical Engineer at OpenHydro. “In addition, this model of sensor has integral electronics and a serial output, which means that we can link it directly to a laptop computer in our test laboratory. This is a very straightforward and convenient arrangement.”

OpenHydro uses the RWT420 sensor in conjunction with Sensor Technology’s TorqView software. This offers a choice of dial, digital bar and chart graph format display for torque, RPM, temperature and power. It also provides facilities for realtime plotting and for data recording, and can output stored results as files that are compatible with Matlab and Excel.

“We have found both the sensor and the software very easy to work with,” said Kevin Harnett, “and the sensor has proved itself to be well able to withstand the tough operating conditions in our laboratory. We’ve also received excellent technical support from Sensor Technology, which was very helpful as we have never previously worked with sensors of this type. Overall, we’re very happy with product and the service we’ve received, and the sensor is providing invaluable data for our development work.”

Proof that this development work is yielding dividends was amply provided late in 2009, when OpenHydro deployed the first commercial-scale in-stream tidal turbine in the Bay of Fundy, Canada, on behalf of its customer, Nova Scotia Power.

This 1 MW unit was arrived on site on 11 November and was operational, rotating with the tides, collecting data and producing energy by 17 November.

For an electronic version of this text and/or image(s), please contact Bob Dobson.

Non-contact torque sensors from Sensor Technology are playing a key role in the development of commercial-scale in-stream tidal turbines produced by Irish company, OpenHydro. The company is using these novel sensors, which are based on surface acoustic wave (SAW) technology, to accurately measure rotational speed and frictional forces in a simulator for the turbine bearings, thereby allowing it to optimise the performance and reliability of its innovative products.