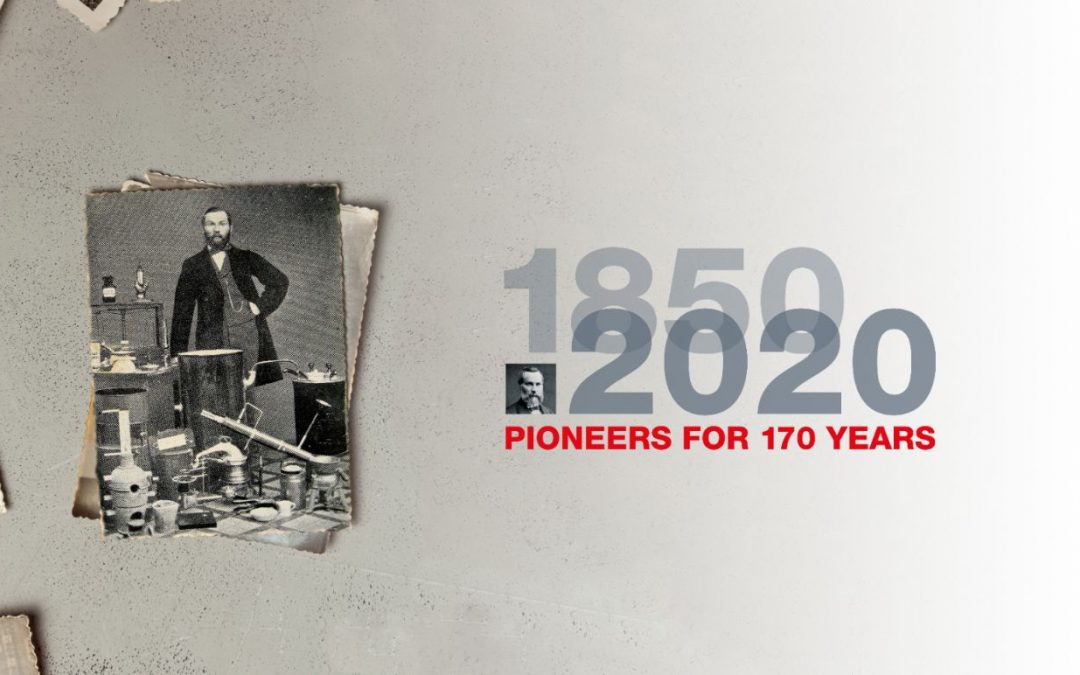 Leybold UK Ltd, Chessington, Surrey, April 2020 ­– Traditionally companies can only be sustainable if they are innovative. The vacuum specialist Leybold succeeded with its combination of tradition and innovation over the course of its history. With this in mind, Leybold is proud to honor this important milestone by celebrating its 170th birthday in 2020.

The foundation of success

Without the tireless work and commitment of several generations of dedicated employees, this anniversary would not have been possible. The businessman Ernst Leybold laid the foundation in 1850, when he moved from Rotenburg ob der Tauber to Cologne founding his first company. Initially as a commission and forwarding agency for medical glassware, ointment pots, thermometer and scales; he expanded his range of products in 1854 to include physical, pharmaceutical and chemical apparatus. Leybold finally sold his business in 1870, though it continued to operate under the name of E. Leybold’s Nachfolger.

The triumphant procession of vacuum technology began in 1906 through collaboration with Dr. Wolfgang Gaede, professor of physics in Karlsruhe. Gaede’s work ethic was characterized by efficiency: “If I pursue an idea out of scientific interest, I always come up with an invention.” The cooperation between Leybold and Gaede was accordingly beneficial, among other things it produced innovations which are still very important today, such as the invention of the molecular air pump, the basic principle of the turbomolecular pump (1911) and the use of the diffusion pump (1913). Diffusion pumps have no moving parts – their operating principle is based on vaporous propellants and enables reliable, low-maintenance operation. These robust “workhorses” are still used in applications today. Gaede’s gas ballast device for efficient pumping of vapors – patented in 1935 – is still used in many applications today.

The year 1913 marks the beginning of vacuum metallurgy. At that time Dr. Wilhelm Rohn, head of the physical test laboratory at W.C. Heraeus GmbH in Hanau, developed a process for melting high-purity metals under vacuum. Interrupted by WWI the “process for vacuum melting and tempering of metals and alloys” was only patented after the war in 1918. In 1931 Wilhelm Carl Heraeus succeeded in vaporizing metals onto glass – another milestone in vacuum coating technology.

Industrial use of the vacuum

Dr. Manfred Dunkel took over as managing director at E. Leybold’s Nachfolger in the same year (1931) and led the company successfully until 1967. The year was defining as vacuum technology was increasingly used industrially during this time. Therefore technical and scientific knowledge as well as management skills were required, in order to transfer the findings into process engineering applications.

Vacuum and process engineering in the portfolio

The Metallgesellschaft AG and the Degussa AG secured participations in E. Leybold’s Nachfolger in 1948 and 1955. This generated synergies ensured success on the world markets and led to a merger of E. Leybold’s Nachfolger and Heraeus Hochvakuum GmbH in 1967. The result was a well-mixed portfolio of vacuum technology and vacuum process engineering. Further growth resulted from product developments such as cryogenic pumps with liquid helium (1962) and helium leak detectors. In 1963 Ion atomizer pumps were presented for the first time.

The 1980s were shaped by strong growth. By 1987 Leybold had expanded to about 5600 employees and achieved a turnover of more than one billion D-Mark. Fundamental changes in the ownership structure took place within the same year; The Metallgesellschaft AG withdrew as a shareholder and W.C. Heraeus also disposed of its shares. The Degussa AG now being the sole shareholder. Now as “Leybold AG” the headquarters were moved to Hanau as well as vacuum process technology. Vacuum Technology were located in Cologne and scientific and technical teaching materials were in Hürth. With the opening of the Iron Curtain in 1989 and the economic downturn of the western industrialized countries the new Leybold AG experienced great economic turbulence. This resulted in the Degussa AG selling its shares to the Oerlikon-Bührle Group (Switzerland) in 1994. 1995 the Leybold AG and the Balzers AG were merged into the Balzers and Leybold Group.

In 1997 Leybold GmbH founded a wholly owned subsidiary in China in order to profit from the high potential of the emerging economic region and customer proximity. In 2000 the Oerlikon-Bührle Group was renamed UNAXIS, accompanied by extensive restructuring by focusing on semiconductor related technologies. This required innovations in the manufacturing technology which Leybold met by opening the new production building for high vacuum technology in Cologne in 2004. Supported by economic growth, the UNAXIS Group was renamed to “Oerlikon” in 2006. Leybold operated under the name Oerlikon Leybold Vacuum until its sale to Atlas Copco.

In 2016 the Swedish Atlas Copco AB acquired Leybold. Atlas Copco is a multi-brand group with customers in over 180 countries and about 37000 employees. Today Leybold is part of Atlas Copco’s Vacuum Technique business area. Atlas Copco is relying on Leybold’s traditional brand strength and on complementing the innovative technological know-how

Synergy between Atlas Copco and Leybold

For 170 years Leybold – with headquarters in Cologne, Germany – has been developing and supplying vacuum pumps, systems, standardized and customized vacuum solutions and services for many different industries. Today Leybold is leading as a supplier of vacuum technology in many industrial applications; such as metallurgy and industrial coating technology.

The synergetic performance of Atlas Copco and Leybold in the fields of industrial dry vacuum pumps and high vacuum pumps for science and research have created a technological platform for the development of sustainable high-performance products for future generations.

You can download these and other photos in high resolution under the following link:

Leybold is a part of the Atlas Copco’s Vacuum Technique business area and offers a broad range of advanced vacuum solutions for use in manufacturing and analytical processes, as well as for research purposes. The core capabilities centre on the development of application- and customer-specific systems for the creation of vacuums and extraction of processing gases. Fields of application are secondary metallurgy, heat treatment, automotive industry, coating technologies, solar and thin films such as displays, research & development, analytical instruments, food & packaging, as well as a multitude of other classic industrial processes.

Great ideas accelerate innovation. At Atlas Copco, we have been turning industrial ideas into business-critical benefits since 1873. By listening to our customers and knowing their needs, we deliver value and innovate with the future in mind. Atlas Copco is based in Stockholm, Sweden with customers in more than 180 countries and about 37 000 employees. Revenues of BSEK 95/ 9 BEUR in 2018.