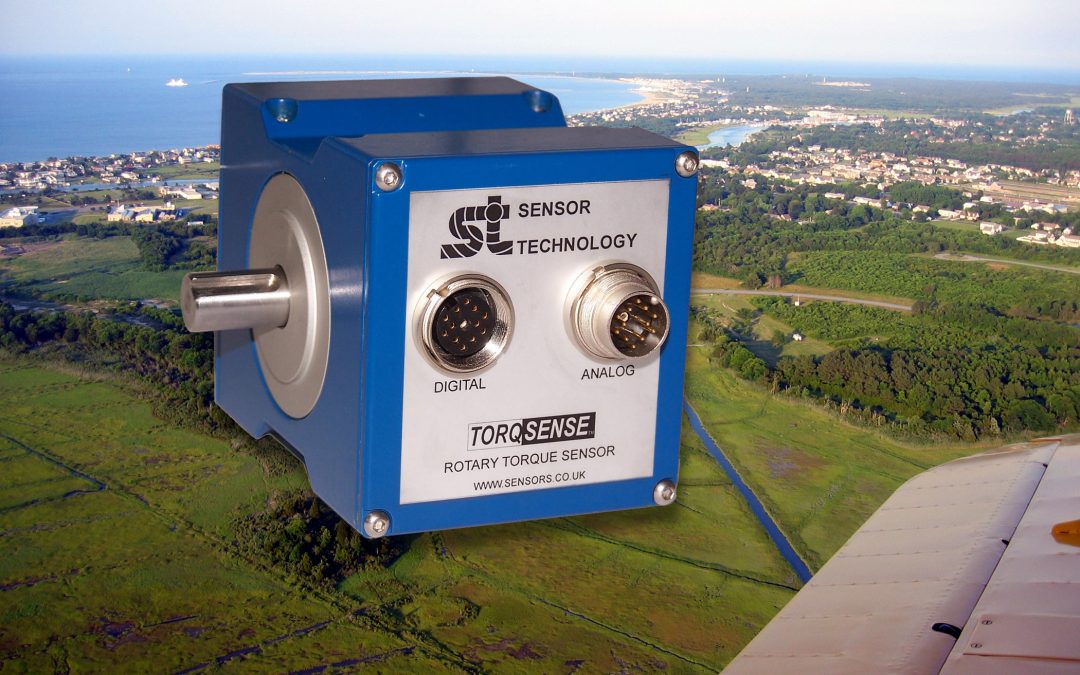 A test rig for putting the next generation of controls for medium altitude long endurance (MALE) drones through their paces has being developed by an independent electronics design company on the Welsh borders.
The rig was developed for this project and will be dismantled after use. However, the precision torque sensor which performs the critical task of collecting data from the rig for analysis will be reused on subsequent jobs. The sensor is a TorqSense from Sensor Technology in Banbury and is as innovative as the latest generation of drones. Its wireless operation makes it quick and easy to install, yet it is capable of generating vast amounts of accurate data.
edium altitude long endurance (MALE) drones or UAV (unmanned aerial vehicles) typically fly at 10,000ft to 30,000ft for 24hrs to 48hrs.  They are used for recognisance, surveillance and surveying, by civilian organisations and the military.  Because of the duration of their flights, their controls must be reliable and accurate otherwise the risk of losing the craft would be unacceptably high.
Resembling a conventional fixed wing aircraft, the principals of MALE drone flight control are well established. Ian Maher of Deva Technologies in Wrexham says: “High performance servo motors are used to position the flight control surfaces. Our test rig’s role is to put the motors through long duration tests to make sure they stay within specification, even after prolong exposure to the arduous operating conditions they are likely to encounter.”
In essence the TorqSense transducer constantly measures the power output at the motor shaft and this is compared to the instantaneous current draw. By taking a large number of individual readings over the duration of the test period an accurate torque-load curve can be plotted for each motor and compared with the expected values.
TorqSense is highly innovative in that it does not need to physically contact the shaft it is monitoring. Instead sensing is achieved through a radio frequency link. Two tiny piezoelectric combs are attached to a shaft inline to the motor under test, perpendicular to one another and at 45deg to the axis of the shaft. These form half of a Wheatstone bridge circuit, which is in radio contact with the other half in the main body of the TorqSense.“When the shaft rotates a phenomenon known as Surface Affect Waves causes one comb to expand and the other to contract, changing their electrical resistance in proportion to the torque” explains Ian. “This unbalances the bridge and generates a signal indicating the torque value.
Significantly, because TorqSense is wireless it is easy to set up, there being no cables there is no need for fiddly slip rings.

Ian again: “It also means we can just as easily take the TorqSense off one test rig to fit to another. We expect to use each one on multiple projects – not For do we save money by not having to buy a new one every time, but we save again because we have become familiar with the technology.